Wherever He leads I'll go

An eventful couple of days…

It’s been an eventful couple of days on the rez.  Monday night I got a call from Mrs. Virginia telling me that her husband, Mr. Ed had been rushed to the emergency room.  It was about 9:30 p.m.  I called a couple of the church members and headed to the hospital. I stayed until they admitted him at about 2:00 a.m.  He was doing better but they are unsure of what is going on.  Mrs. Virginia and I visited for quite a while.  Mr. Ed is the love of her life and her best friend; yet, in the midst of his sickness, they are both still overcome with longing for their Native brothers and sisters to come to Christ.  It is their constant prayer.  I pray that God will place that kind of longing for others in my heart!  Here’s a picture of Mr. Ed with Mrs. Virginia and myself last summer.

Mr. Ed says that Jesus wants him in the hospital so he can witness to everyone he comes in contact with…and believe me, he is doing just that!!! Everyone wants to visit with him and God is using that.  I spent 2 hours at his bedside yesterday and enjoyed hearing of his past mission work with other Natives. What a mighty man of God!

Earlier that day, I had taken advantage of the beautiful weather and  unusually slow schedule for the day and took a drive to the Apostle Islands National Lakeshore on Lake Superior.  I thought I lived on a lake….then I saw Lake Superior.  It goes on forever and is so beautiful!

I came to the lovely town of Ashland, WI and got my first glimpse of Lake Superior at this beautiful dock.

Then at this roadside park.

After a brief visit here, I headed on to Bayfield, a beautiful town right on Lake Superior where fishing is king!

Spring was showing up in Bayfield as well… 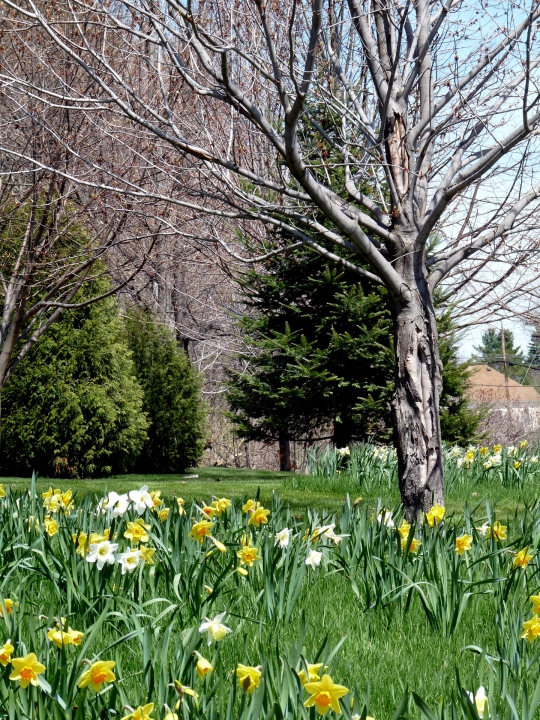 After leaving Bayfield, I headed further north and accidentally discovered this little treasure on Lake Superior.  It is called Little Sands Bay… 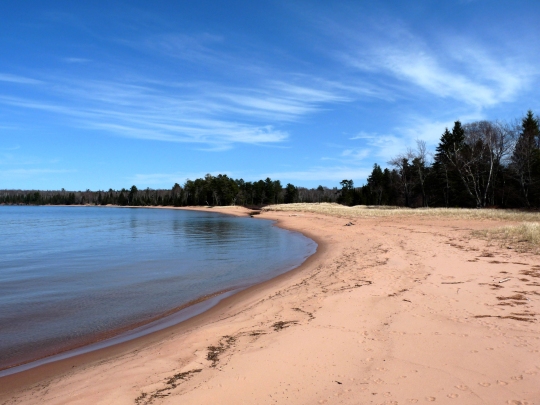 It was extremely secluded and I only saw 4 people there.  One was in a boat and three more were construction workers toward the front of the property.  I was aware that it might be slightly dangerous for me to be there alone, but I was enjoying taking pictures so I ignored the potential danger and continued on…until I saw this…

Yep! That’s a bear track…and not an old one.  I decided then that it was time to go.

I stopped again at Meyer’s Beach…another secluded area…and then headed for home.  On the way home I came upon another cemetery and had to stop if for no other reason than to get a shot of all the purple flowers.

Two and a half hours later I was back home and three hours after that I was at the hospital.

On the road, Update